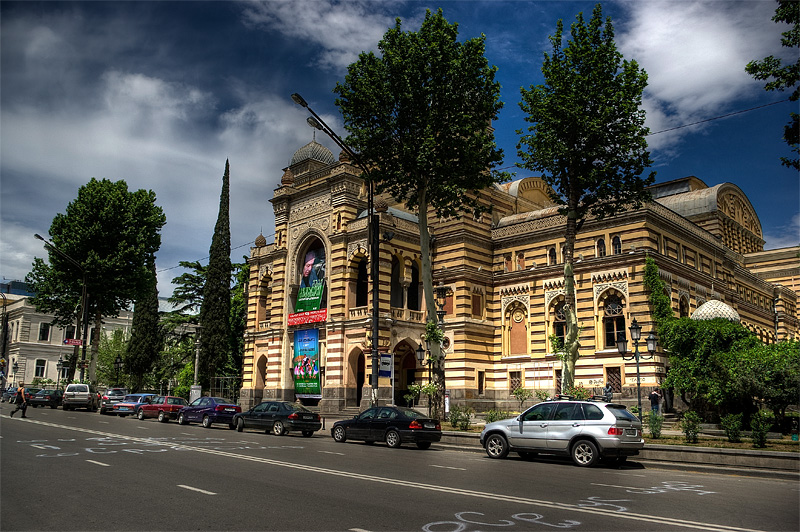 The German architects made a huge contribution to the architectural history of Tbilisi in the second half of the 19th century. Architects such as Albert Salzmann (1833 – 1897), Leopold Bielfeld (1838 – 1922), Paul Stern, Viktor Schröter, Otto Simonson, Johann Dizmann and others are inseparable from the history of Tbilisi architecture. You have largely determined a new architectural face of the second half of the 19th century and the beginning of the 20th century.

Among the buildings built by German architects are the opera house by V. Schröter, the Dom Kwaschweti, the Wentzel Hotel and the Likani Palace of Bielfeld, the palace of the governor and the building of the classical grammar school by Simonson, the town hall building of Stern particularly noteworthy.

Residential houses in Tbilisi that were built by German architects are very interesting. European architecture and local traditions are united here. They took into account the designed architectural face of the old districts of Tbilisi with its courtyards and balconies, enriched facades with the European architectural repertoire and built residential houses of the Tbilisi type with Tbilisi courtyards, Tbilisi balconies, covered wooden stairs, etc.
The architect Alexander Schimkewitch (1860-1907) must also be mentioned here. He was born in St. Petersburg in a Polish-German family, studied at a well-known German grammar school from Karl Mai. Among the buildings that were built by him, one must distinguish the Rustaveli Theater, the main court building, the Tbilisi Conservatory and the current building of the German embassy. He belonged to the Lutheran denomination and is buried in the German cemetery, where the Lutheran Reconciliation Church is today.

The Rustaveli Theater. Arch. A. Schimkewitch
The earliest mention of the German painters is dated to the year 1784, when the German portraitist Josef Heting made a portrait of the last Georgian king Georg XII during his stay in Georgia. has painted. The couple Paul and Helen Franken came to Tbilisi from Latvia around the middle of the 19th century. The painter Richard Sommer was a member of the Saint Petersburg Painting Society when he came to Transcaucasia for the first time in the period 1890-1900 on behalf of an archaeological commission. From 1912 he lived in Tbilisi and began to work as a drawing teacher (his well-known student was Lado Gudiashvili). On the initiative of the founder of the Tiflisser Heimatkundemuseum Gustav Radde, the German painter Max Tilke wandered through all regions of Georgia and created 83 important works in which diverse ethnographic costumes are presented.

The work of the famous battle painter P. Horscheld must also be recognized. At the end of the 19th century, painter Richard Sommer worked in Tbilisi, who was enthusiastic about eastern exoticism and ethnographic subjects.
The descendant of the German colonists was Oskar Schmerling. In his works there are portraits, landscape paintings, battle pictures. He was an excellent illustrator of children’s literature and an excellent caricaturist. He created a number of distinctive colorful types. For a long time he was the director of the School of Painting and Sculpture, and became its professor right after the academy opened.
Alexander Salzmann was the art director of the opera and ballet theater in Tbilisi. For a long time he taught at the school of painting. Irina Stenberg was an excellent, versatile theater painter. Boris Vogel, who created excellent landscape paintings, drawings and pictures of old Tbilisi, was the Tbilisi German. Later he worked in Europe.

It is interesting to note that the architect Anton von Braunmüll was invited to Tbilisi in 1852. He was supposed to found a “Free Building School” in Tbilisi based on the model of the Bavarian Royal Building School. To this end, he had worked out numerous larger projects. However, these were not implemented due to financial reasons.